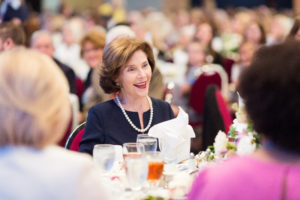 Junior League of Mobile (JLM) Board of Directors focused on expanding member training events this year. The Board explored the possibility of adding a significant training event that could bring in a well known public figure who could inspire our members and educate our community about JLM”s mission. A committee of JLM members formed a speaker research committee. The committee discovered Mrs. Laura Bush is a member of Junior League of Dallas, so she understands and shares the mission of Junior League of Mobile. The committee and Board were ecstatic when Mrs. Bush agreed to come to Mobile to speak to our members and community. Tickets for the event sold out in just a few days!

On Thursday, March 14, 2019, to a sold-out crowd of more than 800 guests in the ballroom of hte Mobile Convention Center, Mrs. Bush acknowledged all of the generous acts of the Junior League and expressed her sincere appreciation of the impact these acts have had in communities across the world. Mrs. Bush reflected on losing former President George H.W. Bush and wife Barbara last year. “They led with love and grace, and in Barb’s case, quick wit,” said Mrs. Bush. The senior Bushes encouraged their family to “enjoy life to the fullest and savor the present because all you have is now.”

President Bush and Laura are happy to be back in Texas, enjoying “the afterlife” and adjusting to their new life after leaving the White House. Mr. Bush spends his days painting and golfing. He has also learned there is “no one to pick up his wet towels from the floor.” Mr. Bush has focused on his collection of oil paintings and stories called “Portraits of Courage: A Commander in Chief’s Tribute to America’s Warriors” in which he honors military veterans. 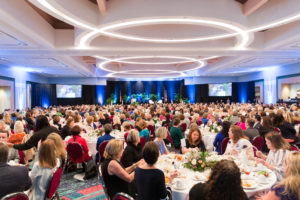 The former first couple has also devoted their time to a new exhibit at the Bush library called “Presidential retreats: Away from the White House.” The exhibit gives an inside look into presidential retreats such as Camp David, Prairie chapel ranch, LBJ Ranch, and Walker’s Point. The Bushes are also busy with the George W. Bush Institute which is “advancing policies that promote economic growth and strengthen our competitiveness in the global economy.”

Mrs. Bush said the best thing that has happened to them since leaving the White House is becoming grandparents. Mrs. Bush was full of pride as she discussed her adoration for her granddaughters, Mila and Poppy. She likened choosing a grandparent name to “choosing a name for your cat.” Her granddaughters wanted to call her “Mimi Maxwell” and President Bush is known as “Jefe,” which means chief or boss in Spanish. Mrs. Bush discussed her daughters, Jenna and Barbara. Jenna Bush Hager is a correspondent for the Today show and Editor-at-large for Southern Living. “George says she’s continuing the Bush family tradition of warm relations with the media,” says Mrs. Bush. Barbara Pierce Bush Coyne is enjoying life as a newlywed. She co-founded and serves as a board chair for Global Health Corps, a leadership development organization working towards health equity.

Mrs. Bush also reflected on her time as First Lady and the days her family spent in the White House. When she first came into the spotlight, reporters kept asking her who she wanted to be. “I just wanted to be Laura Bush,” she would tell them. Mrs. Bush said she felt people associated her identity with a 1950s housewife: a pleasant, dutiful wife who kept her opinions to herself. But she did have a few things to share. “I believe every child should enjoy a quality education and safe and happy childhood,” Mrs. Bush said. She emphasized literacy is essential to democracy and that her passion for children and education was with her long before her time as First Lady. Mrs. Bush taught at an inner-city school but was not prepared for the difficulties her students faced every day. She saw children come to school hungry and many of their families were battling an uphill fight. She said the struggles children are continuing to face as the “greatest challenges of our time.” She said the challenges children are facing today are different: drugs, gangs, internet predators, dropout rates, single parents, parents in prison and they have fewer people to turn to for help. She emphasized young people need us in their lives and they need to know they are valued to be successful. “The problem is great, but greater still is our love for children,” Mrs. Bush said. 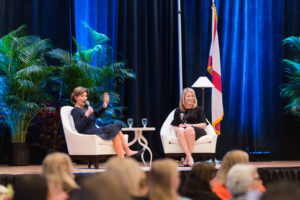 Mrs. Bush concluded her remarks by encouraging all attendees to continue to do what good they can in their community because “even little acts go a long way towards making our country great.”

Junior League of Mobile was beyond honored to have Mrs. Laura W. Bush, First Lady of the United States, speak to our members and our community. “Mrs. Bush was delightful. We hope our community has been inspired to join, partner and donated o the Junior League of Mobile,” said Sarah Bumgarner, JLM Public Relations Director. JLM members are already exploring potential speakers and excited to host this new annual event next spring. We hope you will join us for our next Community Luncheon in 2020!

Click here to view more photos from the luncheon!

By continuing to use the site, you agree to the use of cookies. more information